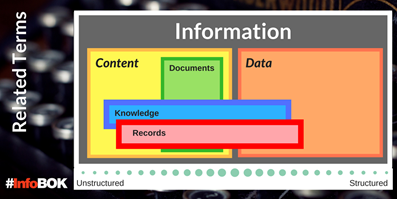 There are so many terms for the things that we manage everyday. Most people’s understanding of them are remnants of what was learned as we each entered the industry. This understanding has been expanded by how we use it in our daily life. The Information Coalition is working on their InfoBok that seeks to finally define these disciplines.

Recently, I was part of a twitter discussion with several people, primarily hailing from the web side of the content management world. It has been many years since I made the argument that the world of Enterprise Content Management (ECM) should include the Web Content Management (WCM) space. The worlds turned out to be connected but distinct. The uses of the word “content” and how it relates to information is evidence of that difference.

I thought I would take time to better share my thoughts where there were more than 280 characters to frame my thoughts. Hopefully, this will stir some more discussions.

END_OF_DOCUMENT_TOKEN_TO_BE_REPLACED

Two book reviews in a row? Yep. As I said in my last review, I’m reading non-fiction a lot more now and I have a backlog of industry books to read. One of the authors of this book, Carrie Hane, is a good friend. I watched her work on Designing Connect Content for pretty much all of 2017. I was very excited to finally get my copy.

For years, Carrie and her co-author, Mike Atherton, have been talking about Designing Future Friendly Content. In the web world this means using a structured content model so that the management of the content is not tightly coupled with the presentation layer. As design trends change, your content and underlying website structure doesn’t have to. Taken to its ultimate conclusion, you are looking at a headless Content Management System (CMS) supporting one or more presentation layers (web, mobile, Alexa…).

They finally took the time to write a book on the topic. It was time well spent.

END_OF_DOCUMENT_TOKEN_TO_BE_REPLACED

This post has been a long time in coming because I’ve been trying to process everything that happened this year. Once again, InfoGovCon was a great event and the Information Coalition should be proud at the quality of speakers that they assembled. After all, how many conferences score a governor and get them to talk about something relevant?

Conferences like InfoGovCon are critical for the industry. We are still building a template for consistent success. As Shannon Harmon, whom I had the pleasure to meet this year, put it,

The best practices are still being developed. The body of knowledge is under construction.  This makes information governance an exciting space within which to work.  It can also be immensely frustrating for those who want a well-defined structure in place.  Working in this space requires a certain comfort level with the unknown.

After decades of working in this space, I agree that there are still some unknowns. We have learned a lot about what NOT to do. It is the way we can get things done consistently that we are still putting together.

END_OF_DOCUMENT_TOKEN_TO_BE_REPLACED

When I dove into the debate on Content Services and ECM, my conclusion was fairly straightforward.

There is a lot of detail buried under that relatively straightforward statement. Content Services is part of a broader trend in the content management space and is here to stay. It has been here since CMIS (Content Management Interoperability Services) entered the picture almost a decade ago but now people are seeing it as more than a way to integrate systems.

The problem is that ECM (Enterprise Content Management) is still just part of the picture. Even if we use the latest tools without regard to the latest buzz words that define them. If we just focus on the content we are failing to solve what needs to be solved.

END_OF_DOCUMENT_TOKEN_TO_BE_REPLACED

Recently, Gartner issued a note announcing The Death of ECM and Birth of Content Services. This has been met with several, mixed responses. Many pointed out to Gartner that many of us have been talking about this for years. I wrote a post on Content Services, Not ECM back in 2013. Going even further back, the concept of Content Services is core to Content Management Interoperability Services. In 2009 I outlined the three fundamental use cases for CMIS, or any content service.

I could spend all day linking to old posts but I want to take some time to bring something new to the discussion. A lot has changed over the years and perspectives have been refined. The last few days have seen my mind wandering and debating this whole topic in my spare, and not so spare, time.

Let me sum it up for you, it is a false dichotomy. Enterprise Content Management (ECM) is not a thing you buy. It should not be taken into isolation. Content Services is useless as a replacement as it is completely different.

Let me break this down.