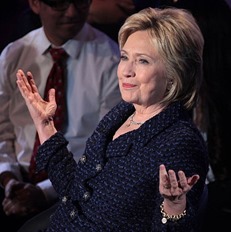 A recent piece of FOIA news was brought to my attention by Ann Snyder over at the Information Governance Initiative. The legacy of Hilary Clinton running her own email server is growing. It seems that the U.S. Department of State has stated that it will take 75 years to release the emails of Hilary Clinton’s aides from her time as Secretary of State.

They then go on to give some outrageous estimates based upon processing only 500 pages per month. I’ve been working with the Federal government for years and have worked on many FOIA (Freedom of Information Act) systems. To understand how ridiculous this is, let’s examine an agency where I’ve been looking at FOIA closely this year, the U.S. Citizenship and Immigration Service (USCIS).

I’ve been helping USCIS on-and-off for 9 years on various projects. Recently they’ve been considering getting a new FOIA processing system. They’ve had to make sure the industry understands the volume of requests that USCIS processes. Here are some numbers, from their 2014 Annual Report (PDF), 2015 Annual Report (PDF), and some industry briefings I attended.

That is a lot of information that is reviewed every year. The volume is growing, faster than USCIS’s ability to respond, increasing the request backlog from 5,026 to 16,247 in 2015. This restricts their ability to collect fees for processing FOIA requests because the increasing backlog makes it take longer to respond to a request. When they take too long they cannot charge a fee.

I decided to look at the public record. I did a quick search and found the FOIA reports for DoS. I’m only going to look at the 2015 report (PDF) for my analysis as that most accurately reflects current capacity.

DoS has a problem. They processed only 28% more cases than they had in the backlog when the year started. If you can barely process the backlog requests, how are you going to handle the new requests? Yes, they have had to process Hilary Clinton’s emails but they were clearly not prepared to handle the normal volume of FOIA processing.

As for the 500 pages per month (6,000 pages/year), DoS added 18,000 documents, including 11,000 Clinton emails, to their virtual public reading rooms in 2015. That is 1,500 documents a month which is a far cry from 500 pages unless every document was only a third of a page. A random selection of emails shows that many are over 1 page. In fact, Hilary Clinton’s emails average almost 2 pages per email.

We have to acknowledge that coordination with other agencies is tough and it takes time. However, many of the emails from Clinton’s aides have already been reviewed during the review of her emails. The aides also likely have common emails between them. That overlap will increase the pace.

What’s the solution? They likely don’t need a new IT system as USCIS is handling a much higher caseload, even if it is less complex, with an old system. DoS needs to augment their staff to clear the backlog and get into a better operational state. This goes beyond the current email questions. It goes straight to their ability to deliver on their FOIA responsibilities.

I don’t know what the real number is but I can tell you that if the answer is more than a couple years, it is too long.

4 thoughts on “FOIA, Email, Clinton, and the State Department”