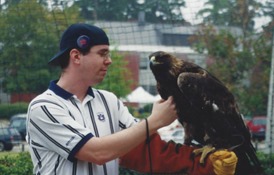 This week, an old friend died. Tiger, known to many as War Eagle VI, passed away after complications from surgery. She was 34, one of the oldest golden eagles in captivity. Being born in captivity, and imprinting on humans, releasing her into the wild was never an option.

Tiger was more than a mascot. She was more than an eagle that I helped care for while at Auburn. She was an educational resource and a source of inspiration. She made appearances at schools across Alabama and occasionally locations further away if she was passing through town. You weren’t allowed to hold her at an appearance if you couldn’t talk about Tiger’s history, golden eagles in general, or the threats to their native habitats.

And she was family.

While I hold no special claim on Tiger, I likely spent more time with her than anyone who wasn’t a trainer. In fact, why I wasn’t a trainer is a source of mystery. When I was at Auburn, Tiger was cared for by my Fraternity. My fraternal big brother Bill, was the Head Eagle Trainer. Both of my little brothers became eagle trainers, one eventually becoming the head trainer. Even my best friend and roommate for three years was the Head Eagle Trainer.

I wasn’t, but I have some stories.

Getting to Know Tiger

All pledges were required to work with Tiger a little. Like every pledge before me, I learned the basics of what was involved in taking care of a Golden Eagle. When my car died and I was stuck in Auburn for spring break, I got a chance to do even more.

The dorms closed for spring break, so one of the brothers, the head eagle trainer Erich, took me in for the week. Tiger was fed a special bird-of-prey food every day, requiring a trainer to be in town almost every day. For exercise, trainers would take Tiger our of her her aviary and fly her back on forth between them, encouraging her with food.

I don’t care how tough you think you are. The first time you try and catch a full grown golden eagle when her talons are extended towards you, you flinch a little. Sometimes a lot.

The basic problem is this, it is really hard to go home for the holidays, much less a weekend, if someone has to be there every day. Luckily, there was a solution for that, animals.

You cannot just feed a raptor defrosted meat. Their craw needs to be cleaned out regularly, which happens naturally with every meal in the wild. That’s right, small bones and hair clean that craw right out. Given a large enough animal, Tiger could goes a few days without another meal.

Once a month, she would be fed a dead rat. These were provided by Auburn’s veterinary school. Typically they were acquired and kept frozen until needed. The frozen rat would be defrosted in a microwave prior to being given to Tiger.

Normally we used the microwave in the school’s cafeteria.

Throwing Tiger a rat on Friday meant that she wouldn’t have to be fed again until Sunday. For holidays, 48 hours wasn’t a lot of time. So the Wednesday of that spring break, Tiger was fed a rabbit.

Tiger was fed a live rabbit to give her a little exercise. Typically, a trainer would go to a pet store and ask them which rabbit was the most energetic and buy that one. That spring, Erich found a gem of a rabbit.

It was an epic chase. Tiger swooped down and missed. The rabbit ran around, jumped into the pond, swam across, and then hid underneath the waterfall that circulated the water. The rabbit was safe there but it felt trapped. The rabbit saw a place it liked and made a break for it. We’ll never know what the rabbit saw as it never made it.

Satisfied that Tiger was fed for several days, we left. 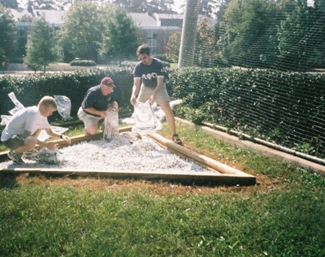 Over the years, I helped with many projects. We installed fresh sod in the Eagle Cage along with a sprinkler system. There was a new pump house and I helped organize a 5K race to fund a small building to store supplies and provide her with a better inside home for health reasons.

Health reasons? Yes. We had to clean her feet everyday to prevent an infection called Bumblefoot. She caught it my final year in Auburn and she had to be kept inside. This was no problem as we had large cages used during travel to hotels and it was a small matter to keep her inside while her feet healed.

So that summer, Tiger moved into my place.

My roommate, Ed, was the head eagle trainer. I was a de facto eagle trainer that summer because whenever a trainer bailed on feeding Tiger early in the morning, rather than just feeding her without flying, Ed would come get me. He would come into my room, kick my bed, and we would go take care of Tiger. 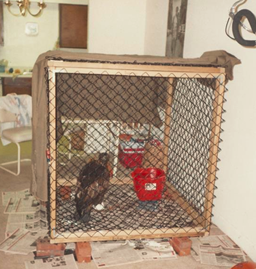 Our place was big enough, so Tiger moved in with us. Ed made her feel right at home, turning the TV so she could see it. Yes, eagles can watch TV though I am not sure if she enjoyed our show selections.

This went on for a week until Ed made a mistake. He took Tiger to the pool. While at no time was Tiger in any danger, the apartment complex management noticed and mentioned that we were in violation of the pet clause in our contract. While Ed argued that Tiger wasn’t a pet (he is now a lawyer), management was unmoved. Tiger was relocated for the rest of her recovery.

Tiger was more than a mascot to me. She was a being for whom I cared a great deal. She was a great judge of character. I got to show her to kids, incoming freshmen, and happy alumni.

The last time I got to see her was in 2010. In celebration of Tiger’s 30th birthday, Auburn threw a birthday party during Homecoming. I made it down and introduced my boys to Tiger. A group of former trainers got to pose for a final shot to the right. She was in a good mood and still remembered which trainers she liked more than others.

I am going to miss her.

9 thoughts on “Saying Goodbye to an Old Friend”