That has been my life the past week or two.  The good news, there is no one thing causing the chaos.  The better news, some things that have been hanging over me for the past year are now resolved, mostly for the positive.  Now I just need to catch up on all of my projects which will take the rest of the week.  I even plan on getting back to my posts.  I have some good ones slated for the next couple of weeks.

The highlight was one night when I strolled into one client’s office in the middle of the night to perform some triage.  There had been an issue and I wasn’t onsite that day and was unable to be onsite, in normal business hours, until the following week.  So I trudged into the office unsure of what was going to be required to get things back to normal, and I saw these Elvii from down the hall. 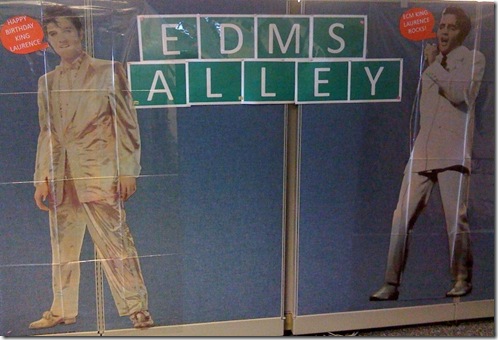 I had been scheduled to be in that day, and it was the closest, onsite day to my birthday.  I had missed the celebrations due to a sick child (better now). It was a nice little pick-me-up in the middle of the night.  What was especially cool was the tie-in to Las Vegas that Elvis automatically brings.  I flashed-back to the good parts of EMC World.

I won’t share what else was done, but suffice it to say that there is some revenge to be dealt out.