A few months ago, the Gartner report on ECM came out and I shared a few comments. Well, Forrester put their version out and I thought I comment on it as well. This is the first of two likely posts, focusing on the overall report this time around.

In general, no real news in the rankings as compared to Gartner. No surprise there. Why rock the boat? 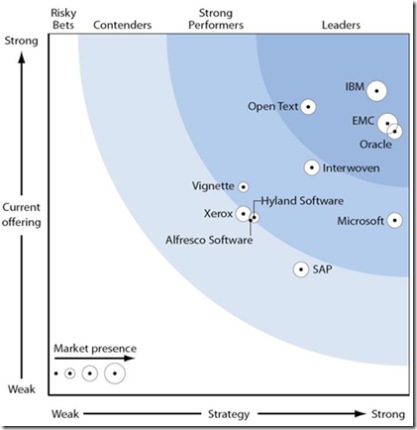 There are a few key things to note.

Forrester defines Platform Readiness as, Is the vendor’s core set of ECM capabilities part of a common platform, or does it consist of different, independent products? After looking at the scores for each vendor, I have to ask myself, What are they smoking? I mean, come on! Most of the major vendors got a 5.00 in this realm. Let’s break down three vendors quickly:

I didn’t even break a sweat on that. Now, they evaluated the first product suite listed for each one. SHORT SIGHTED!!! If a vendor doesn’t have one platform for everything, then they should get docked. If they can’t merge the platforms, or don’t plan to do so, dock them on Product Strategy as well.

For the record, I’m not saying that Gartner is any better. I didn’t see any breakdown of their scores, so they were spared this scrutiny.